"Lacrymosa" is the seventh track from Evanescence's second studio album, The Open Door. An alternate, more orchestral version of the song is also included on Synthesis.

"Lacrymosa" was written by Amy Lee and Terry Balsamo, produced by Dave Fortman, and recorded in a chapel near Seattle, Washington. In a number of interviews, Lee revealed that everyone asked about a collaboration between her and Mozart.[1] She further stated that she always wanted to make Lacrimosa from Mozart's Requiem a metal song, later adding that The Open Door was "the time for that, for trying things I hadn't been brave enough to try before."[2] In an interview with VH1 News, Lee further explained the inspiration behind the song: "I saw Amadeus when I was nine years old and fell in love with Mozart. The part of Mozart's Requiem called "Lacyrmosa" [sic] is my favorite piece of music ever. I always wished we could cover it, but with programming and guitars and make it cool. It's our moment to try all the things I wanted to and couldn't, so I started messing with it in Protools. Terry wrote some riffs and turned it into this awesome metal epic."[3]

The song was written for The Chronicles of Narnia's opening scene in mind, but it was rejected because "the directors wanted something original", as it was inspired by Mozart's Requiem.[4] The directors, however, stated that Amy was never asked to compose any music for the film.

When the song was re-recorded for Synthesis, Amy explained it was a natural choice to do it on the orchestral album:[5]

The original was based on Mozart’s ‘Requiem’ and the movie Amadeus, which is why it was a natural choice to include. It was something I’d wanted to do for a long time before we did it on The Open Door album. ‘Lacrymosa’ is one of my favorite pieces of classical music. I’ve always been proud of the song. To do it now, and get to pump up the orchestra and classical music aspect of it, feels really good. I threw in a little bit of opera in there instead of the choir in the original. I feel like it’s a cool piece of who I am. Not on a corny level, just a teeny-tiny taste. 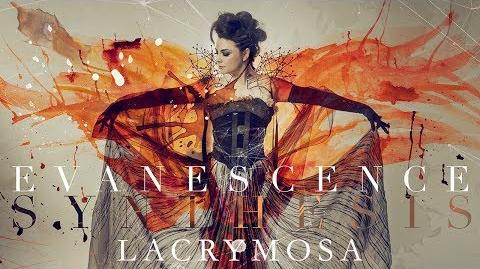