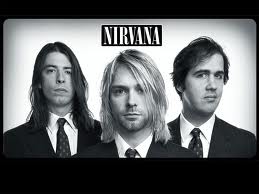 Band whose song Heart-Shaped Box has been performed live by Evanescence. Before the release of The Open Door, some Nirvana fans mistook the Evanescence's song Lithium as a cover of the Nirvana song of the same name. However, the two tracks are unrelated. This is what Dave Grohl had to say about Evanescence:

Retrieved from "https://evanescence.fandom.com/wiki/Nirvana?oldid=5784"
Community content is available under CC-BY-SA unless otherwise noted.