The End Of the Dream (song)

"The End Of the Dream" is the ninth track on American band Evanescence's self-titled third album. An alternate, stripped-down version of the song is also included on Synthesis.

The song was never played live during the tour in support of Evanescence because, according to Amy, it's nearly impossible to sing as the notes are "so long".[2] "You need an extra pair of lungs to actually sing it. Live, with all the running around, it's really not do-able", she added.

That song is about life and death. I guess that's very general and it's very Evanescence. But it came from a very personal, real place. In my mind when it's going through the very first verse, it's like:

The song was chosen to be reworked on Synthesis, and Amy explained why:[3]

The song was originally written with programming, synths, loops and vocals, but turned into a full-on rock song on Evanescence.[4] This is why the song was chosen to be re-recorded on Synthesis, as explained by Amy:

There's also something to me that I remember the spookiness of the first verse [on the demo version], the feeling and the gravity of those lyrics. I love those lyrics and miss the way that it felt when it was very sparse. You could hear them and feel them and perform it in a way that was not tied to a beat. It was just full emotion.

So in this [Synthesis] version of it, we stripped it back to that and made it way better than it was in the demo from the early days. We did it though with that in mind that this part that I loved so much ... it was something where I could just go to a place and I'm not tied to a beat or on the click track, nothing. There's just a drone and singing and it feels so good to just start the song off that way and just go into that place and take my time with it and let the song unravel into something bigger.[4]

On Evanescence, the song is titled "End of the Dream", but a "The" was added at the beginning on the album's re-release on vinyl as part of The Ultimate Collection box set and also on all streaming services. The Synthesis version also holds the same title. Both are legal titles of the song.[5] 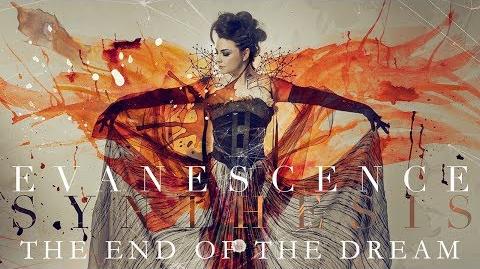