"The In-Between" is the fifteenth track on Evanescence's fourth studio album, Synthesis. A piano solo, it serves as the intro to "Imperfection".

In the tour program that it was available at the merch table and given to those who purchased VIP packages for Synthesis Live, it is explained that this song is an instrumental and why it is titled "The In-Between":

Like the reminiscence of Whisper in the Overture, this piece begins with slowly evolving memories of songs that didn’t make their way onto Synthesis in full. (See if you can guess which.) The repeated note in the low register of the piano that begins in the second half of the piece goes from being on the downbeat, to the upbeat when the melody jumps in between the notes, and becomes the dominant part, defining the repeated note as the pedal point. So the title of the piece refers not only to the fact that it is an instrumental that comes in between two songs, but also that the melody lives, somewhat unexpectedly, in between those repeated notes.

The songs hidden in the track are "Hello", played in a different key in the first 30 minutes,[1] and "Eternal." 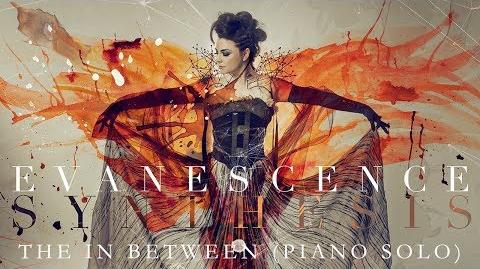 EVANESCENCE - "The In Between (Piano Solo)" (Official Audio - Synthesis)